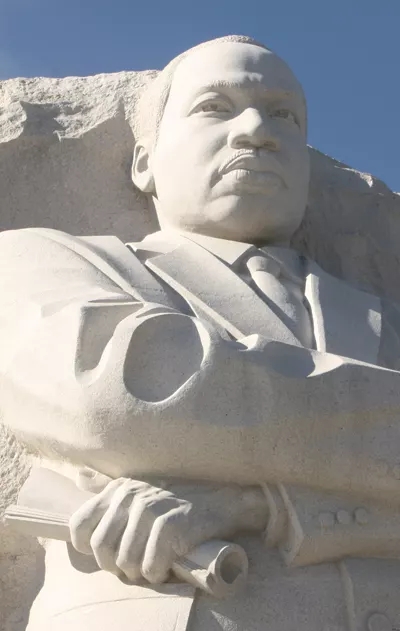 I trained and prepared to be a history teacher and loved teaching American history the most.  I enjoyed teaching the American Revolution, the creation of the Republic, the Civil War, the Gilded Age, and 20th century history.  The units, themes, ideas and words seemed to culminate in the Civil Rights movement for me.  I tried to frame the founding of our nation with the words of the Preamble which include “…in order to form a more perfect Union” and then use Lincoln’s challenge from the Gettysburg Address to call our nation towards “…a new birth of freedom.”  What I tried to help students reflect on is how individuals and groups, young and old, urban and rural from multiple creeds, backgrounds and geographic regions held notions of freedom and then were willing to act upon them not just for their own benefit but for those around them and those that would follow.  As Americans living in 2023, we stand on the shoulders of heroes whether we know their names or not.

Students could recognize injustice and a lack of fairness, and they took it to heart.  Although the answers to the challenges in our society are not easy, they are not too complex for students to contemplate nor resolve to change.  I had one student who came back and taught in our school.  She shared with me that during our Civil Rights movement unit, she became passionate about also teaching history to young people.  She is a constant reminder and encouragement to me that educators truly touch the future through empowering others.

Of course, during the Civil Rights unit, I taught about the struggles and triumphs of leaders such as Dr. Martin Luther King, Jr.  I had students read Letter from a Birmingham Jail and his “I Have a Dream” speech.  I enjoyed helping students evaluate them both as sources of inspiration as well as rhetoric and persuasion.  One work that I overlooked and have now come to appreciate is his “Drum Major Instinct” sermon preached just two months before his assassination on April 4, 1968.  In this sermon, Dr. King referenced a passage in the Bible where two of Jesus’ disciples ask him for prominent positions around his throne in heaven.  As I listened to a recording of Dr. King deliver this sermon, it touched me perhaps deeper than the other more well-known primary sources to which I often pointed students.

Dr. King spoke about the desire to be out front with a position of leadership.  He said, “We all want to be important, to surpass others, to achieve distinction, to lead the parade.” He used the text from Mark 10 to show that Jesus recognized this desire for leadership but turned it toward the need and call for service.  A transcript of the sermon reveals this insight:

In this sermon, Dr. King calls us to greatness and distinction as leaders in our families, neighborhoods, communities, work and beyond, not by being the shiniest or the proudest but by being the greatest servant.  He went on to say that because this is a new definition of greatness, we all have the capacity for greatness in us.  I will never be able to dunk a basketball or will never complete a million dollar merger, but I can serve.

I needed this reminder and challenge from Dr. King’s words and from the teachings in the tenth chapter of Mark.  I do want to be good at my job.  I want to do big things.  I believe what I do is important, but not for me, for students in our hallways, classrooms, gyms and cafeterias.  It’s important for students in extra-curricular activities and those who never join a club.  It’s important for students who ride the bus, a longboard, their bike, walk or drive a car.  And being great is something I can do.  Being great is something you can do.  Be great by serving and when you do it, do it for them.

Here is a link to the King Institute of Stanford and background on “The Drum Major Instinct.”

Here is a link to the National Park Service’s memorial for Dr. King

Here is a link to a 2018 piece in The Atlantic by Dagmawi Woubshet about the sermon.  The online piece includes a link to the funeral service for Dr. King where a portion of the sermon was played.

The image is from the National Park Service website